Doctrine of Eternal Judgment, Pt. 1-B: Look to Jesus and Live!

“And as Moses lifted up the serpent in the wilderness, even so must the Son of Man be lifted up, that whoever believes in Him should not perish but have eternal life” (John 3:14-15, NKJV). 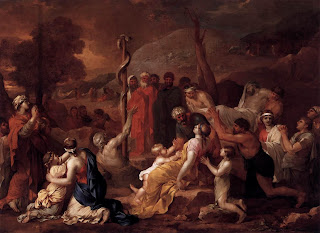 “Then they journeyed from Mount Hor by the Way of the Red Sea, to go around the land of Edom; and the soul of the people became very discouraged on the way. And the people spoke against God and against Moses: ‘Why have you brought us up out of Egypt to die in the wilderness? For there is no food and no water, and our soul loathes this worthless bread.’ So the Lord sent fiery serpents among the people, and they bit the people; and many of the people of Israel died. Therefore the people came to Moses, and said, ‘We have sinned, for we have spoken against the Lord and against you; pray to the Lord that He take away the serpents from us.’ So Moses prayed for the people. Then the Lord said to Moses, ‘Make a fiery serpent, and set it on a pole; and it shall be that everyone who is bitten, when he looks at it, shall live.’ So Moses made a bronze serpent, and put it on a pole; and so it was, if a serpent had bitten anyone, when he looked at the bronze serpent, he lived” (Numbers 21:4-9, NKJV).