The title of this post probably has many of you intrigued. Over the last two years or so, I’ve written on some rather serious issues: doctrine of perseverance, inclusivism and theology of religions, Calvinism, Arminianism, Molinism, Open Theism (these four soteriological systems), etc. I’ve written on many books that really didn’t fit with the sections I’ve created at the blog. Today, however, I am paying a return visit to the “Faith and Film” section created here at the Center for Theological Studies. I love the study of faith and film with all my heart, and I don’t get to study it enough. Now that I’ve graduated, I can finally sit back and pursue some things that I think are just as enjoyable as my academic research, but are “academic” in perhaps a different way and still pursue the glory of God.
View the following in order:
*Space Invaders, Pt.1-A:
* Space Invaders, Pt. 1-B:
*Space Invaders, Pt. 2-A:
*Continuation of Space Invaders, Pt. 2-B:
*Space Invaders, Pt. 3-A:
*Continuation of Space Invaders, Pt. 3-B:
*Worlds Collide, Pt. 1-A:
*Worlds Collide, Pt. 1-B:
*Continuation of Worlds Collide, Pt. 2-A:
*Worlds Collide, Pt. 2-B:
*Worlds Collide, Pt. 3-A:
*Worlds Collide, Pt. 3-B:
First off, before I get into an analysis of the Teenage Mutant Ninja Turtles story (which, from the videos, is a rather long one), let me just encourage those of you who have children to watch the cartoon episodes with your children. I loved TMNT as a child, and I imagine they will too. There are more such cartoons on Youtube, and they will certainly enjoy many of the other episodes of TMNT available on Youtube. Thank God for those who placed these online!
This blog post was created in my mind during the cartoon watch itself. Professor Honeycutt is a robot who created the teleportal, a device that both the Triceraton (the space creatures) and the earth inhabitants (called “The Federation”) desire to possess to use against one another: the Triceraton desire to make themselves undetectable and destroy the Federation, while the Federation desires to destroy the Triceraton for good. The only one who has the knowledge of the teleportal device (its makeup and building plans) is Professor Honeycutt. This explains why both sides (Triceraton and Federation) desire to capture the Professor.
In Worlds Collide, Part One, Prof. Honeycutt sends a video speech to the Utrom High Council (head of the galaxy), telling them that he was on earth. The video was sent to them after the Triceraton departed from earth the first time (thinking Prof. Honeycutt was there, much to their surprise). The video itself told the Utrom High Council that Prof. Honeycutt was surrendering to the Triceraton because the Triceraton had done horrible violence to the galaxy, as they traveled from planet to planet destroying everything in their path (all to find Prof. Honeycutt). Honeycutt decided to turn himself in to put an end to their violence. The video message is as follows:
“A message from Prof. Honeycutt to the Utrom High Council: my dear friends, by the time you receive this, I shall be gone. This morning, a sub-space viewing device planted on the earth alerted me to the planet’s imminent fate. As you know, both the Triceratons and the Federation want my plans for the teleportal device so that they may use it to further their war of annihilation against each other. They will destroy the earth in their hunt for me. I have calculated and recalculated the probabilities, and there is only one sure solution: I must erase all information pertaining to the teleportal and then surrender myself to the enemy. I know the risks are high, and there is a 95.6% certainty that I will not return. But I beseech you, do not try to stop me. For it is as they say, ‘Greater love has no robot than this; that he lay down his RAM for his friends.’”
Professor Honeycutt’s last statement should ring a bell. Honeycutt’s last words on this video are a spin-off of Jesus’ words from John 15:13--- “Greater love has no one than this, than to lay down one’s life for his friends” (Jn. 15:13, NKJV). With these words, the cartoon producers want Christians to get the hint that Prof. Honeycutt is a “Christ figure” in this cartoon. I don’t think the hint could be more direct. 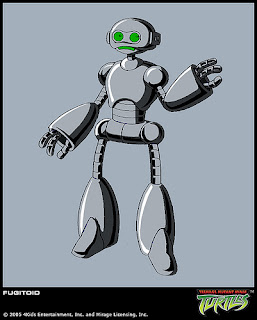 As the cartoon progresses, though, we find that there are other characters surrounding Honeycutt who play a role in the action (in the same way that other persons surrounding Jesus play a role in the events leading to Jesus’ Crucifixion). After Prof. Honeycutt sends the video to the Utrom High Council (knowing that the Triceratons will come get him), he waits with the Ninja Turtles for the Triceraton arrival on earth. Once they get here, the Ninja Turtles surround Prof. Honeycutt and pull out their weapons: Leonardo pulls out his two swords, Michaelangelo his nunchunks, Raphael his daggers, Donatello his staff, all to defend the Professor from being captured. The scene here reminds us of the Garden of Gethsemane, where Jesus, after praying, is surrounded by His disciples as the Roman guards come to arrest him. The disciples, like Professor Honeycutt’s supporters (the Ninja Turtles), pull out weapons to defend Him. In the case of Jesus, Peter [like Leonardo] is the disciple who pulls out his sword and (according to a Gospel account) cuts off Malchus’s ear (Malchus being one of the Roman soldiers in charge of arresting Jesus) [see John 18:1-11; Luke 22:47-50].
In some sense, the “Utrom High Council” refers to a power above Prof. Honeycutt. Here, it could be said that the Utrom High Council represents divinity, deity, Godhood, God Himself, since the High Council is outside of earth and lives above the Galaxy itself. The High Council, at any rate, seems to be the “superior” to which Prof. Honeycutt informs that he will “surrender himself to the enemy.” Jesus surrenders Himself to the enemy, turns Himself over to the Sanhedrin to be tried for the false charge of treason.
But there is also an opposing power to the Triceratons, a power simply known as “The Federation.” The Federation is really another code word for “US Government,” and the Federation wants Prof. Honeycutt’s plans for building the teleportal as well. The Federation is represented by General Blank. The Federation here represents the Pharisees of the Gospels, who simply wanted Prof. Honeycutt (the Jesus character) for their own selfish purposes.
This becomes evident when Agent Bishop, the one responsible for turning over Prof. Honeycutt to the Federation sees General Blank (Federation head) and says, “Alright, we had a deal.” What we gather from this statement is that Agent Bishop (CSI) made a deal with General Blank (the Federation); Judas does the same with the Pharisees in the Gospels betraying Jesus (his Lord and friend) for money [Matthew 26:14-16]. In addition, “Bishop” fulfills the Judas role extremely well after he is alone with the Ninja Turtles, whom he uses to extract mutant DNA in order to produce an army of Ninja Turtles. Michaelangelo, strapped in to one of the tables, says, “You’re making a big mistake, Bishop. You can’t trust that Blank guy [Federation]. He’s no better than the Triceratons.” Bishop responds, “Federation? Triceratons? It makes little difference to me. I help one destroy the other, and they promise to give me what I need and leave the earth alone.” Here, Bishop seems completely unconcerned about the war between the Triceratons and Federation; he simply wants his own selfish gain. So did Judas. Intriguingly enough, though Bishop seems to be Judas, he does have a certain “Pharisaic” trait to him: even though Michaelangelo attempts to level with him about the evil General Blank, he seems not to care: “it makes little difference to me. I help one destroy the other...” The Pharisees do this to Judas when he returns the money, feeling guilty over his sin: “What is that to us? You see to it!” [Matt. 27:3-4]
Last but not least, what about Prof. Honeycutt? He serves as the Christ figure by performing the ultimate act: giving his life, infecting the Federation system with a virus after being connected to the system itself. The system is closed down to prevent the virus from uploading (by the Federation), but Donatello has to cut the system on in order to allow Prof. Honeycutt to finish uploading the virus. This scene is similar to Simon of Cyrene helping Jesus carry His cross up to Golgatha, the place of the skull [Matthew 27:32]. In the same way that Simon “assisted” Jesus in performing the ultimate sacrifice, Donatello does the same thing for Prof. Honeycutt.
Professor Honeycutt, in the end, serves as the “peace” that tears down the wall of division between Triceraton and human, just as Jesus breaks down the wall of division between Jew and Gentile [Ephesians 2:14-16]. This is best demonstrated when, after Prof. Honeycutt uploads the virus onto the Federation system, he says, “May peace prevail.” He is peace “robotified.”
My final thoughts: I think every parent should watch this cartoon with their children. Even if one is an adult without children, he or she should still watch these few episodes to see tenets of the Gospel displayed in cartoon fashion. I enjoyed watching the episodes; but the fact that they serve as a great springboard for child (and adult) evangelism excited me even more. I hope you find them to do the same. 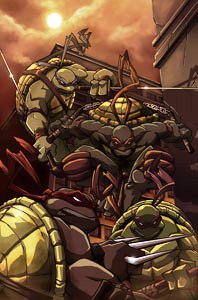