Does Exhaustive Divine Foreknowledge Eliminate Human Freedom? An Examination of the Words of Dr. Greg Boyd 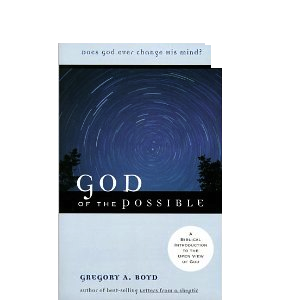 I enjoyed Dr. Boyd's book, and am glad you read it. I am not a divinity student, but I do know that as I slowly gain a better understanding of the diversity of theological thought, I better clarify my personal evaluation of what I believe, and how it motivates me to live for Christ.

I am not clear as to how your argument refutes anything Dr. Boyd wrote. It seems to me that your final conclusion "If human freedom really exists, then humans can change future events because God has granted this possibility" exactly agrees with Dr. Boyd's views.

Elsewhere you say, "So, God foreknows an event that was certain at the time, but does not happen. How can the believer make sense of this?"

I think they are a difference without a distinction. A future "actuality" that does not come to pass is, by the duck test, nothing more than a possibility by another name. An "actuality" that God can envision as occurring is indistinguishable from a "possibility" in that, if the "actuality" never comes to pass, then it was never an "actuality" at all, only a possible outcome that God foresaw might happen.

Which takes us back to Dr. Boyd's concepts of might and might-not, and how they play into our conception of God and how He works in our lives.

I wish you the best of luck on your Masters, and may God use each of us to our fullest potentials in Christ!

This is Deidre, owner of the CTS blog. Thanks so much for commenting here at the center for theological studies.

In regards to your comment, my disagreement with Dr. Boyd is over the idea of God knowing only future "possibilities." Boyd's work seems to suggest rather strongly (at least from my interpretation of it) that God can know what a person "might" do, but cannot know what an individual will "certainly" do.

Boyd believes that God foreknows His own future decisions, His own future responses to individuals. But how can God foreknow future responses to individuals if He does not foreknow what those individuals will do? God's foreknowledge of His own decisions is much stronger than just "I may do this, depending on this." Genesis 3:15 (the protoevangelium or first gospel) is such an example. God foreknew His exact actions in the future, not what He "could" or "might do." But how would He foreknow this if He did not foreknow exactly what Adam and Eve would do in the Garden?

I think that if God can foreknow at least one action of an individual (that He did not cause), He can foreknow actions of all individuals that He did not cause. Pharaoh in Egypt is a good example. The Lord told Moses that Pharaoh would not heed Moses' words, though the Lord did not cause this. And this example of Pharaoh is one that proves divine foreknowledge without divine foreordination. How does it make sense to say that the Lord Himself punished a Pharaoh whom He made to sin and rebel against God? Would this not be a case of God punishing unjustly?

I differ with Open Theism over the issue of divine foreknowledge. I don't understand why divine foreknowledge must necessarily entail divine foreordination. That seems to be an underlying philosophical claim of Greg Boyd's book...but holding to such a view seems to emphasize more of man's freedom in the process to change the future than divine control over it. I agree that the Scriptures teach divine sovereignty (divine foreknowledge), and I also agree that the Scriptures teach human responsibility (man's freedom). If open theism is right, however, God's control over the future is very limited, and man has more freedom over the future than God has foreknowledge of it. What I see in Scripture, though, is that man does not control the end of time...but God does, despite our actions. And only God foreknows the exact end, despite our choices. Because man has been made a little lower than the angels (Psalm 8), he has less control than His Creator does. Man's freedom is a derived freedom given by the Almighty God.

Thanks for writing, and feel free to return to CTS and comment at any time. God bless.