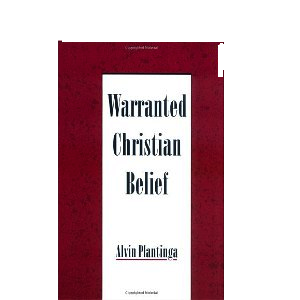 Plantinga isn't saying that evidence does not show rationality in court-room cases. He is merely saying that you cannot provide evidence for everything. It is impossible as a human to provide arguments and proofs for every belief we have. For example, you cannot provide evidence for the belief that all beliefs require evidence. To do so would be circular. At some point, we have foundational beliefs that we rest on axiomatically and from which we form other beliefs. You know the sky is blue, you can't prove it, for all you know, your senses of perception may be faulty, but you still know the sky is blue.

I guess you do not know my policy here at CTS, but here it is: if you do not have a valid account that I can address here at blogspot (that is, a membership at blogger), I tend to ignore comments and abandon them. I want to have real interaction with readers, and think it plain rude that a commenter would remain anonymous while I clearly reveal my identity.

To answer your response, however: I agree that there are beliefs that we have that serve as the foundation from which we form other beliefs. At the same time, are the "assumed beliefs" we have rational? That is the point of the post...to say that we do not think the sky is blue at random, do we? No, of course not! We believe the sky is blue because we've been taught that the color of the sky matches a "blue" crayon or piece of paper, for example. From there, we assume that any time we see that color in or on an object, the item is blue.

Some would interject here and say, "but what if the color wasn't blue? What if the color were some other label but we just have no knowledge of it"? At this point, I would say that the question, as intellectual as it may seem, can serve us no purpose. The reason it cannot serve a purpose is because we cannot know if there are other possibilities for the color of the blue crayon. What if the sky were red? Are we still rational to call it blue? Well, yes! Everything in our experience teaches us that the sky is blue. If the color is red, though the majority of humanity considers the sky to be blue, we have lost nothing by assuming the color is red. If we assume the color is red while the majority of human experience labels it blue, we have a basis by which we can be called irrational.

This idea that the senses are faulty is a question that sounds excellent to ponder on the surface; yet, the problem persists in the fact that we can sit around and question everything within our existence: however, what purpose does it serve? I can question that I have oxygen, but how am I breathing? Is there another explanation that can take the place of the traditional one? No, of course not. This is why I believe RE posits too much philosophical pondering where biblical answers are sufficient.