Faith and Reason: Spock In "Star Trek, The Future Begins" 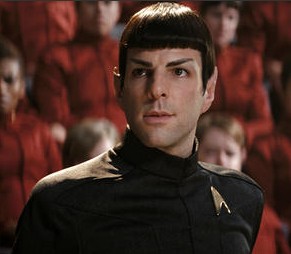 This past Tuesday I decided to have a “pre-Thanksgiving” get-together with friends. I live next door to a couple that I’ve adopted as my brother and sister-in-law. That’s right: they have become family in such a way that I feel as if I’ve been part of their lives (and they part of mine) for the last twenty-six years. It’s pretty weird when you consider that my adopted brother is 31 and his wife’s 25...
In any case, we spent the evening eating some Sonic food (which is always good) and watching the new Star Trek film, “Star Trek: The Future Begins.” Chris Pine plays the young James Tiberius Kirk, the son of the “late” James Kirk who died above the starship during a Romulan attack while his wife gave birth to their son. According to the movie, the last words the father James said to his wife were, “What are we gonna name him?” Her response? “We’ll name him Jim after your father.” Years go by, and all of a sudden, the viewer is taken to a young boy driving a crazy car on the highway. He is stopped by an authority and asked his name. “James Tiberius Kirk,” the boy proudly responds. It is this James Kirk Jr. that grows up and becomes all and more his father could’ve ever wanted him to be.
But the focus of the movie seemed to use James Kirk’s existence (and the death of his father) as a second source of action. The main character seemed to be Spock, who is both Vulcan and human. According to the movie, even when Spock was a child, there were moments when he would fight with other boys, angry over the things they said about him and his father (whom they called a traitor). Spock’s father revealed to him that because he is both Vulcan and human he would have to learn how to tailor his emotions. Over time he went on to achieve more as a child of the ship than anyone ever dreamed. His problem was that he was completely rational to the point where he could easily shut out all emotion. With Spock, the viewer sees the atheistic view of “Non-Overlapping Magisterium” (NOMA), in which faith and reason are two completely distinct concepts. In other words, faith goes to the left, reason to the right; faith is “just a blind leap into the dark” while reason is “based on empirical analysis and scientific observation.” This is why Spock’s personality is so rational without emotion. 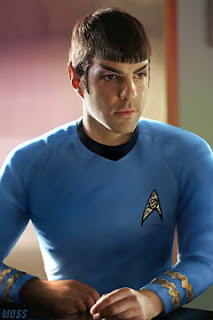 The only trace of emotion that is seen in Spock occurs when he attempts to get his mother off planet earth (the planet attacked by the Romulans) and his mother gets killed and the planet dissolves in a black hole. Then and only then does Spock express anger over his mother’s death. While in secret quarters with his father, Spock tells him, “I am angry about what happened to mother, I am angry at those who killed mother.” It is at this moment that Spock seems most “human.”
While Spock is dealing with his emotions, James Kirk is thrown off of the ship into a future world where he meets an older version of Spock (the Spock of the future). The older Spock tells Jim (James) that the younger Spock is vulnerable because of his mother’s death; Jim’s goal would be to cause Spock to show his emotions before all, which would disqualify him from serving as captain. James returns to the ship and provokes Spock to anger such that Spock attempts to strangle James Kirk. Once he realizes he has “compromised” his role as captain, he surrenders his post and retreats to his quarters. 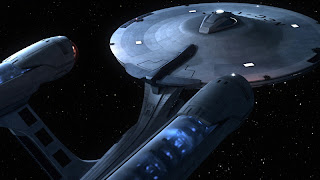 The end of the movie finds Spock debating whether or not to stay with Starfleet. As the older Spock departs, he tells James to tell Spock to stay; “for once,” the elder Spock says, “tell him don’t trust his logic, just have faith.” Here we see that to be logical (at least in the minds of the movie producers) goes against faith (belief).
Why such a division between faith and reason? The presupposition of faith and reason divided is a component of contemporary culture and its existentialist theology. William Lane Craig writes the following about Rudolph Bultmann, a proponent of existentialist theology:
“Bultmann construes faith in epistemological categories, opposing it to knowledge based on proof. In the existentialist tradition, he considers it ESSENTIAL TO FAITH THAT IT INVOLVES RISK AND UNCERTAINTY. THEREFORE, RATIONAL EVIDENCE IS NOT ONLY IRRELEVANT, BUT ACTUALLY CONTRARY TO FAITH. Faith, in order to be faith, must exist in an evidential vacuum. For this reason Bultmann denies any significance for the Christian message to the historical Jesus, apart from his bare existence. Bultmann recognizes that Paul in 1 Corinthians 15 does ‘think that he can guarantee the resurrection of Christ as an objective fact by listing the witnesses who has seen him risen.’ But he characterizes such historical argumentation as ‘fatal’ because it tries to produce proof for the Christian proclamation. Should an attempt at proof succeed, this would mean the destruction of faith. Only a decision to believe wholly apart from evidence will bring one into contact with the existential significance of the gospel” (William Lane Craig, “Reasonable Faith: Christian Truth and Apologetics, Third Edition.” Wheaton: Crossway, 2008, page 37).
To have evidence for Christianity, then, according to Bultmann, would be to possess evidence “contrary to faith.” How can support for faith be contrary to faith? In Bultmann’s view, the answer is found in the fact that faith needs no reasons at all for belief. Faith involves belief, and only belief.
But is this the view of the Scriptures? Do the Scriptures tell us to have blind faith and believe irregardless of the evidence? Not at all. If Bultmann is right, why does John the Beloved disciple write his Gospel containing the words
“And truly Jesus did many other signs in the presence of His disciples, which are not written in this book; but these are written that you may believe that Jesus is the Christ, the Son of God, and that believing you may have life in His name” (John 20:30-31, NKJV)?
Notice in Craig’s quote above that Bultmann seems to agree with Paul’s intentions regarding his apologetic in 1 Corinthians 15. But why, then, does Bultmann go on to disagree with Paul? The answer is found in the fact that for Bultmann, existentialist philosophy (i.e., truth is subjective) means that there is no inherent truth in anything! With regards to Christ, the truth of Christianity hinges not on whether or not Christ really did rise from the dead (i.e., the death and resurrection’s historical veracity); rather, what makes it true is IF YOU BELIEVE IT TO BE TRUE. “That which a person believes to be true in their heart, so it is,” Bultmann would say. The problem with this however, is that, if I believe in anything, it can be true merely because I believe in it! For example, if I believe that I own someone else’s car, I own it (because, in this system, I believe in it). But if there is truth, then truth is liveable; and somehow, when I go to steal that person’s car, I will find myself arrested behind bars; while I own someone else’s car (in my mind), I do not own that person’s car in reality. And in society, to take something that does not belong to you is stealing and is subject to local, state, and federal punishments.
If truth is based on faith and emotion, then what’s true to me may not be true to you...and what’s true to you may not be true to me. Is there not objective truth in the world, such as laws against rape and murder, stealing, etc.? If there is objective truth, then certain principles must be established as truth on the basis of something OUTSIDE of the human self (which means that emotions as the ground of truth are disqualified).
Even Star Trek has a bit of an existentialist feel to it. But for most, Star Trek is just a great motion picture with great cinematic effects. I think the cast is phenomenal and the graphics are great in the movie; however, I think the movie is also portraying a “faith vs. reason” agenda...and I think that when the cinematic effects are pushed aside, one will find existentialist philosophy at the heart of the new motion picture. 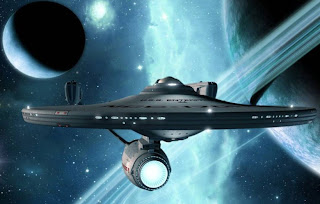