The Lord of Seahaven: The Return of Kirk (The Truman Show)

Today’s post is titled after a “Lord of the Rings” movie. Of those that are out there, I went to the movies to see “Lord of the Rings: The Return of the King.” It was a good movie, I thought then. I have few memories of what actually happened in the movie...but I remember my feeling when the movie was over. I thought it was marvelous to see the good triumph over evil. I think that Christians love such stories. Despite the evil that exists in our world, we look forward to the day when the Lord Himself will destroy death, sin, sickness, tragedy, sorrow, and will wipe away every tear from our eyes. However, “until that day comes,” as Matt Redman says, “Still I will praise you.” That is my desire (and prayerfully yours); that we will praise the Lord until He returns for His Bride, the Church.
In this post, I will grant what I promised; that is, to talk about “The Return of the Kirk.” From my last post, I stated that Kirk was the supposed “father” of Truman Burbank. Let me state this at the outset, though: Kirk is not the biological father of Truman, but he’s the only father Truman has ever known. Truman, according to Christoff in his television interview, is the first child to ever have been adopted by a corporation. Therefore, Kirk is the only father Truman could ever call his own. He never met (doesn’t know) his biological parents. The “mother” character he runs to is also not his biological mother either. Even Truman’s very family is “determined” by Christoff (except Truman’s true parents are never brought up). Truman doesn’t even know the whereabouts of his biological parents. He’s never been told he’s adopted, never had anyone try to contact his real parents, etc. And, as a result, Truman assumes that “mom” and “dad” are his true parents. In the television interview Christoff was asked “Why do you think that Truman has never ever come close to questioning the truth of his world until now?” Christoff responded, “We accept the reality of the world with which we’re presented, it’s as simple as that.” In other words, because things “seem” to be one way, we accept them as such, never questioning them, never investigating to discover why things are the way they are. 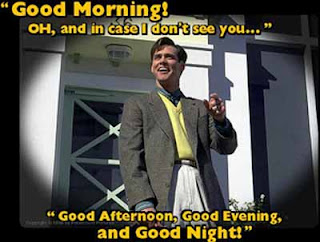 Now, let’s get on with “The Return of the Kirk.” One night Truman is out with his best friend from childhood (Marlin, who is also an actor in the whole drama of Truman’s life). While out, Christoff plans to return Kirk to the show (although Marlin claims he brought Kirk back for Truman’s sake). Truman sees his father and then begins the dramatic moments between father and son:
(Christoff speaking to his crew as Truman walks toward his dad on the bridge) “easy on the fog; stand by green cam...green cam...button cam 3...quiet, curb cam 8...fade up music (music starts)...and now...(camera zooms in to Truman crying while hugging his dad).” 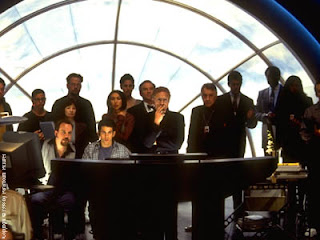 At this point, Christoff’s face shows intense joy as his “dramatic success” has unfolded. All the crew are happy and rejoicing, telling Christoff, “Bravo.” For Christoff and crew, the Return of the Kirk was not about right or wrong or how they played “God” with Truman’s life; rather, it was about themselves. Christoff decided he wanted to bring Kirk back after 22 years, so he did...and what he got out of it was how “dramatic” and emotional it all was. There was no thought given to how morally repulsive such an act had been.
In the last few posts, I’ve attempted to be truthful to the events in the movie (as well as the quotes). The point of discussing the movie is to see what theologically we can learn from it. It seems that “The Truman Show” gives us a man who lives in a dream world (Seahaven) and does not know the truth of his environment or world. “Truman” (not even the character’s real name; name given by the corporation) assumes the physical reality he sees without question. And who is responsible for all this? Christoff. Christoff is the great controller of Truman’s life, dictating not just events and family but even Truman’s emotions (placing items in strategic places that make him think about his father and then reuniting him with his dad after 22 years of absence). Christoff seems to be bent on making Truman stay in his world, ignorant of the world outside of Seahaven. His goal? Deny Truman knowledge and Truman will simply assume the world in front of him. Keep Truman ignorant and he will not use his freedom to leave. And yet, Christoff could actually point to Truman as the blame: “If his was more than just a vague ambition...if he were absolutely determined to discover the truth, there’s no way we could prevent him. I think what distresses you, caller, is that ultimately, Truman prefers his cell.”
I think the movie presents an atheist theme: that the Christian God (or at least the God of Classic Theism) is the God that is bent on keeping people ignorant of the truth, forcing them to assume an imaginary version of reality, even toying with the emotions of human beings for His own sick enjoyment. But the bright spot in all of this is that although the atheist does not know it, he is not raging against the God of the Bible; rather, he is raging against a “notion” of what the God of the Bible is really like. It’s one thing to dislike something as it truly is; it’s another to dislike something “as you perceive it to be.” The atheist believes that God is like Christoff in the movie (which explains why God in this movie is deceptive, cruel, and revels in His own glory at bringing Kirk back after 22 years without giving thought to Truman’s emotions). However, God is not like this at all. Sadly enough, I think that the atheist picture of God is what Calvinists and Molinists (to a lesser extent than Calvinists) have painted. Atheists today are railing against this notion of divine sovereignty that “does whatever He pleases,” as the Calvinists say--- that freely chooses some and freely damns others...and does so for “His greater glory.” This is the God that atheists despise.
But there is hope...I think this movie is a great one for evangelism. If you ever get a chance to witness to an atheist you know, sit down and show him “The Truman Show.” Show him that you honestly desire to understand his grievances against the “God” he thinks exists. And then when the movie ends and he explains, “That’s the God of the Bible,” you can turn around and say “No--- that’s your notion of the God of the Bible. Now let me explain who God really is.” Show him that our Lord is not malicious, not deceptive, does not toy with our emotions, does not get pleasure out of our pain, etc. More than being consumed with His own glory, God is for our development as believers, our conformity to the image of His Son. He is more concerned with disciplining us and remolding and reshaping us, than He is with toying with us. And why? Because God desires to inhabit eternity with us, not apart from us. When we awake to the new heavens and the new earth, it will all become clear that although He was not forced to, He loved us because He chose to. Sadly enough, I think it’s a misunderstanding of the intensity of God’s love that makes Calvinists and Molinists paint Him the way they do on film, in theology, etc. As for the atheist? It’s the picture painted by the Calvinists and Molinists that make him hate God all the more. 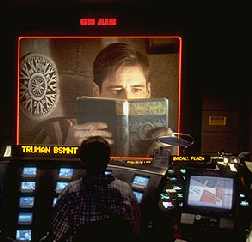