Actions Have Consequences: How the Unevangelized Testify to the Fall of Genesis 3 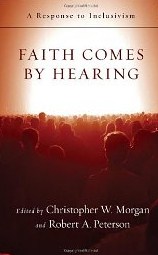 I have this book and like you enjoyed it. What a good book. The writers did an excellent job of presenting a clear and biblical understanding of both the gospel and why it is necessary to evangelize all nations. Without the gospel, none will be saved. This is the point of Romans 10:14-17.

I did enjoy the book. I enjoyed it so much that I highly recommend it to every inclusivist I come into contact with. I'll post more on inclusivism in the days to come...so stay tuned!