Inclusivism and Its Implicit Assumptions 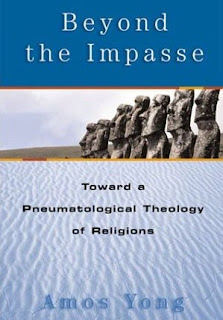 I once e-mailed Yong after I picked up a book of his on the Holy Spirit. I believe he claims to be Pentecostal. It seemed to me, back then, that he didn't hold to inerrancy and nearly all Pentecostals hold to inerrancy. He never wrote me back. Now I see why.

Yep. He doesn't hold to inerrancy clearly when it comes to the idea of the Spirit. He says this about the relationship between the Spirit and Christ:

"I am certainly not arguing for a view of the economy of the Spirit as completely sovereign or unrelated to that of the Son. I am, however, affirming that the turn to pneumatology may allow for more neutral categories to emerge when attempting to discern the presence and activity of the Spirit in other traditions" (Yong, "Beyond the Impasse," page 186).

My question to Yong is, however, what difference does it make to have neutral categories? And how can the Christian become "neutral" towards other faiths when the Scriptures themselves teach Christ as the only way to salvation (John 14:6)? To make "neutral categories" by which to equally value all religions is nothing short of pluralism, despite Inclusivist claims that their theology is different from pluralism.

Thanks Roy for responding. Stay tuned...there is more to discuss regarding Amos Yong and inclusivism.